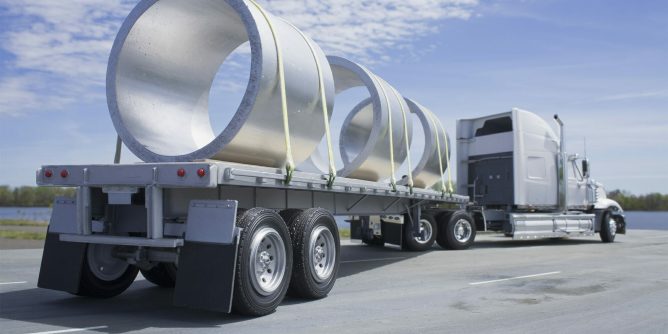 Over dimensional transport is regulated by the department of transport in each jurisdiction that vehicles travel through. As an example, each province and state might have different classifications of permits available for oversized loads. These include specific dimensions for weight, length, height, overhang and many other details.

Generally speaking, an oversized load requires a higher standard of care due to the number of dynamic variables that go into each move.  For example, each jurisdiction considers its public safety and road condition considerations, as well as the time of year, when determining restrictions for size and weight.

As a general rule of thumb when shipping freight within Canada, any over the road transport combination that is greater than 75’ long, 8’6” wide, 13’6” tall is considered oversize. There is no rule of thumb for Canada that states a specific limit on gross vehicle weight before a load is considered oversize but there are set limits on how much weight can be legally loaded per axle in each province.

For example, in Ontario, a truck is legally allowed to load 12,000 lbs on the steering axle, 39,600 lbs on a tandem axle, and 59,400 lbs on a tridem axle for a total gross weight of 111,000 lbs. Any vehicle combination that exceeds these legal axles or gross weights will need to obtain an oversize permit in Ontario.

Once loads start getting above a certain size threshold, a province or one of its municipalities may impose the need to travel with an escort vehicle. Escort vehicles are meant to travel either in front or behind the heavy hauler in transit to alert traffic and pedestrians to ensure that everyone exercises a higher level of care when there is an oversize load with obscure dimensions in transit. Each province sets its threshold for when an escort vehicle is required, which varies greatly by province. For example, any load over 12’7” wide will require an escort vehicle in Alberta. Once the load crosses the Saskatchewan border, an escort is only needed if the load is over 16’4” wide or it crosses the centre line of a two-lane highway.

Oversize Regulation in the United States

Like in Canada, the size and weight restrictions for a heavy hauler will depend on the corresponding state legislation and specific section of the highway the oversize load is travelling on in the United States.

In general, loads that have overall dimensions greater than 75’ long, 8’6” wide, and 13’6” tall are considered oversize in the United States. There is an exception for most states that are west of the Mississippi River, where authorities will allow loads up to 14’ tall to travel without needing an oversize permit. For example, a load that is 13’11” tall would be considered oversize and would need a permit to travel in Michigan, but would be legal to travel without a permit in Texas.

Shipping heavy loads within the United States is quite different than in Canada. In Canada, you can shiploads that are greater than 80,000 lbs gross without a permit. In the United States, any load that is greater than 80,000 lbs gross is considered oversize, and each state has a set out maximum limits for the amount of weight that can be permitted per axle.

Among the lower 48 states, the restrictions in place for moving over-dimensional freight are less restrictive amongst states that have lower population densities compared to states that are within the eastern seaboard that have a very concentrated population density. For example, in the state of North Dakota, loads can travel without an escort vehicle up to a width of 16’ and a height of 18’ whereas in New York State an escort vehicle is required for any load over 12’ wide and 14’ tall. Therefore, the costs of moving oversize loads vary so much between certain geographies as the restrictions and costs associated vary greatly amongst states.

There are general dimensions that will determine whether a heavy hauler is considered oversized. These include axle weight, total weight, height, length, width and overhang. While there is some standardization in this area, there are many rules and requirements that depend on the specific state/province, as well as the type of road that you’re travelling on.

It is critical that you work with an oversized load trucking company like Vectra Heavy Haulers. With many years of experience, we have great knowledge of the regulations that are required when moving oversize loads. Miscalculation or ignorance of the regulations will not only carry detrimental consequences and fines to the heavy hauler, but it will also end up costing you more time and money than was initially budgeted

Request a free quote for over-dimensional transportation or any other Vectra Heavy Haulers services, or contact us if you have any questions.